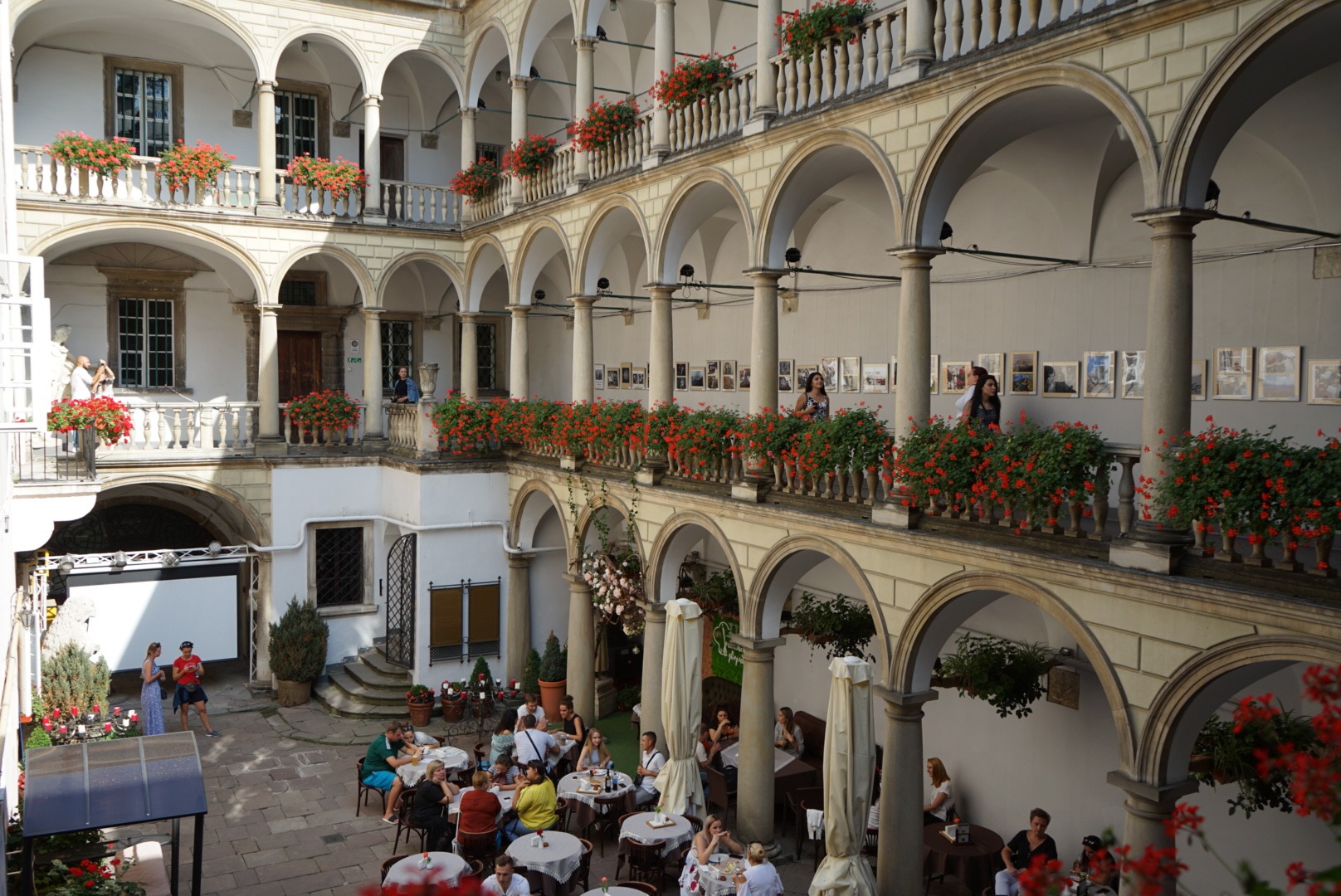 If you are going to visit Lviv, you should definitely get a cup of coffee in the famous Italian courtyard. It is a hidden jewel in the heart of Lviv (Rynok square) with a great history as with almost everything in this city. In fact, a visit to the Italian Courtyard is one of my top recommended things to do in Lviv, Ukraine!

The Italian courtyard was built in 1580 as a part of Kornyakt House. The place was rebuilt by a rich merchant from Greece –  Konstantin Kornyakt. For the great service to the king, he was allowed to buy a property on the Rynok Square.

Later from 1640 to 1709 this house belonged to the Sobieski family. John III Sobieski lived in this building quite often before being coroneted in 1674 and is the most famous owner of the building. Twelve years later on December 22, 1686 Jan III Sobieski swore allegiance to the articles of the Eternal Peace at his residence in Lviv, what basically meant division of Ukraine between Poland and Russia. It, perhaps, was the most significant event in the history of the building.

The end of the XVIII century the building was property of Casimir Zhevsky, who was one of the first Freemasons in Lviv and was the leader of sociable life.

Here you can see different sculptures that have interesting stories behind them. For example:  Lorenzowicz stone lion, which was erected on a column at the end of the 16th century before entering the town hall as a symbol of the city. Or the top of the shameful pillar, that was placed in the city center in 1425. It looks like a man that is the executioner and the goddess of justice Themis, who is blindfolded. In one hand the goddess had a sword and in the other – scales. Thieves, drunks, bullies where chained to the pillar with iron rings for  the purpose of “exposing to shame”. The death sentences only for the nobles were executed near the pillar on the temporary platform, built for this purpose.

This courtyard is built in the style of the Italian Renaissance. It has three tiers of beautiful arches. On the first floor there are massive columns which are holding the slender and more graceful columns on the second and third floors.  In warm weather there is an open terrace, where you can enjoy the calmness and coziness of this hidden place, since the Rynok Square is usually quite a busy place. Here you can have aromatic coffee or delicious drinks from the menu and enjoy Italian dishes, surrounded by antique furniture, old columns and fresh flowers in arched spans. The atmosphere of this place will endure you in the XVII century and for a few minutes you can become a nobleman.

The Italian courtyard is hosting different exhibitions at all time as well as concerts of jazz and classical music, since the place has perfect acoustics. This courtyard is also a stop on my city break in Lviv article if you are coming here just for a couple days.

The Italian Courtyard Of Lviv