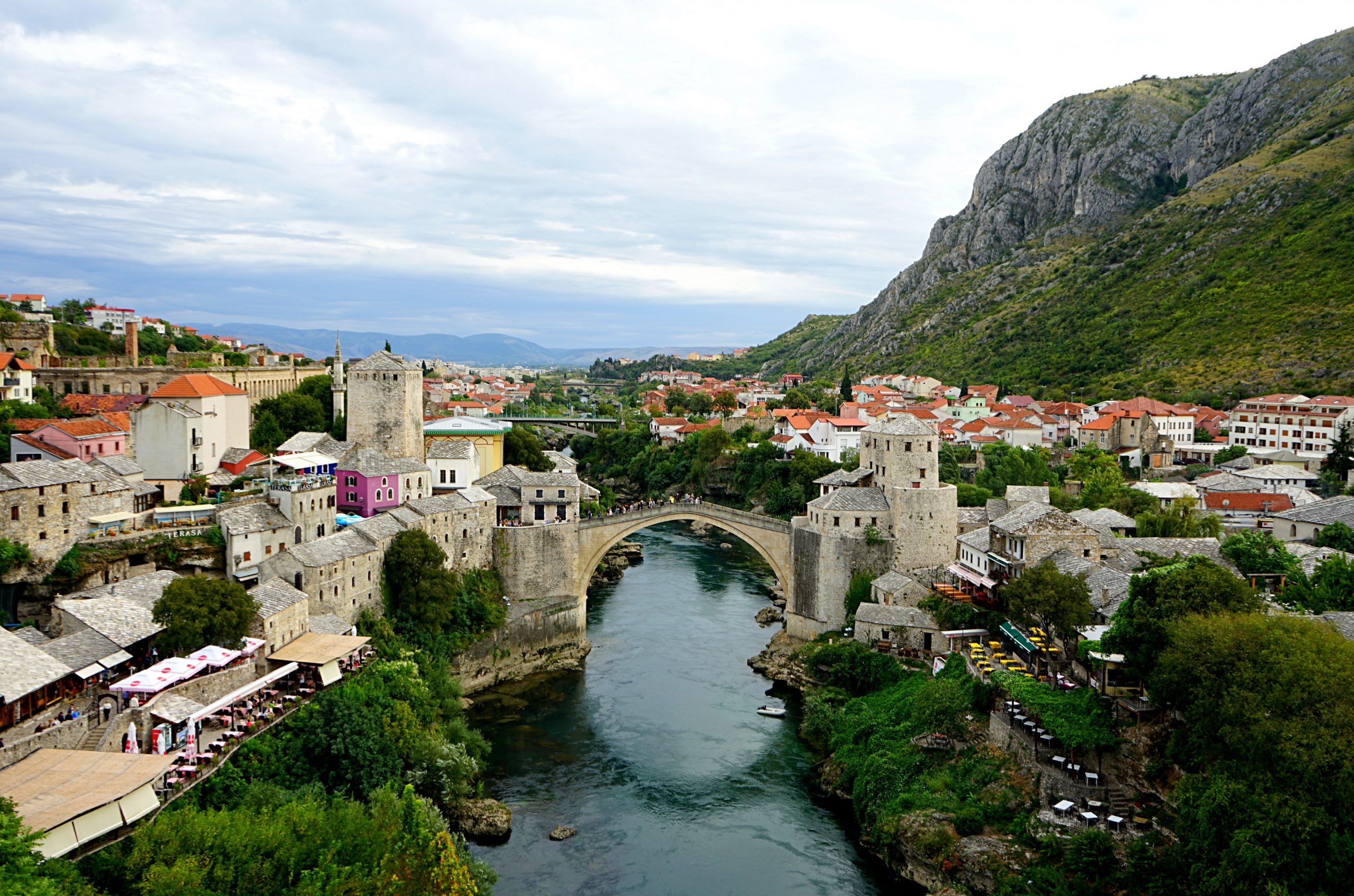 After spending a week in Sarajevo, we decided to visit one of the oldest and most beautiful cities in Herzegovina – Mostar.

If you want to know how Mostar looks from above click here and it will take you to my drone video! Or go to my drone page to see drone videos from many cities I’ve been to.

An Introduction To Mostar

Mostar is located south of Sarajevo and lies on the banks of the Neretva River. The word “Mostar” means old bridge, hence the name of the city. The main attraction is the crescent-shaped bridge built during the Ottoman Empire and it divided the Muslim and Christian parts of the city.

With the advent of the Ottoman Empire in the Balkans, Mostar became a city of three religions: Muslims (Bosnians), Catholics (Croats) and Orthodox (Serbs). And until the 1990s, when the military conflict between Croats and Bosnians began, the people of this city managed to live peacefully. Unfortunately, during the war, the old bridge was completely destroyed, as were 90% of the old buildings.

People tried to save the pearl of the city as best they could. They made various coverings over the bridge, but it did not help, the Croatian army fired at the bridge and destroyed it, leaving nothing.

After the war, the International Tribunal accused the leadership of the Croatian organization of crimes against humanity and other war crimes including the destruction of the Old Bridge.

At the end of the war in 1997, reconstruction of the city most precious bridge started. Architects worked with old documents to accurately rebuild the old bridge. The stones for the bridge were lifted from the bottom of the Neretva River, and missing stones were extracted from the old quarry.

Countries such as Italy, Croatia, France, the Netherlands, Turkey and such organizations as the World Bank and UNESCO have donated money to rebuild the bridge. In 2004 the bridge was completely renovated. The entire Old Bridge area has been named a UNESCO World Heritage Site.

The main industry of the city is the production of aluminium, hydroelectric power, and the more recently developing tourism.

There are two easy ways to get to Mostar:

The train from Sarajevo to Mostar departs twice a day. It takes two hours to get from Sarajevo to Mostar. After years of using the old trains, Bosnian Railways now have the modern Talgo trains. And it is a great pleasure to travel by these carriages, since the old trains were quite old and sometimes you would have to stand the whole way unless you found a free chair.

The bus system is quite developed in Bosnia and Herzegovina. The road between these connections is repaired, so the path will be pleasant and not bumpy at all. Besides, the buses are new and often have free Wi-Fi. The journey will take about two and a half hours.

The road runs through the mountains and you will enjoy amazing views of the Neretva River Canyon and the mountainous expanses.

If you decide to take the bus to Mostar, be prepared that there won’t be any bathroom stops for the full two and a half hours.

You can buy bus tickets online here or here. But you will have to print the tickets yourself, and on arrival at the bus station you will be sent to the box office to receive a bar code, for which you’ll pay another 2 BAM per ticket, so the price is slightly higher than just buying a ticket at the bus terminal.

The best option is to just choose the suitable bus departure time online here or here, arrive at the bus terminal a half hour before the departure and buy tickets at the ticket office. It will save you nerves and money.

Where To Print Your Tickets

If you have already bought a ticket online and are looking for where to print it, there is a print shop in the middle of the old town. The name is Fotokopirnica Morica Han, the address is Sarači 77 (it is located inside the historical Morica Han complex), working hours are: from 9 AM to 6 PM. Be sure to print tickets the day before, since the store sometimes opens late (that is what happened to us) or if you are staying at the hotel just ask at the front desk, I am sure it won’t be a big deal for them to print few pages.

Be sure to check the timetable in advance since the bus companies sometimes change the schedule!

Ticket price: from 5€ to 11€ dependent on the departure time and the bus company (check the ticket prices here or here)

Ticket price: from 5€ to 11€ dependent on the departure time and the bus company (check the ticket prices here or here)

Take The Train From Kyiv To Lviv

If you have followed the blog at all, you should know by now that I…