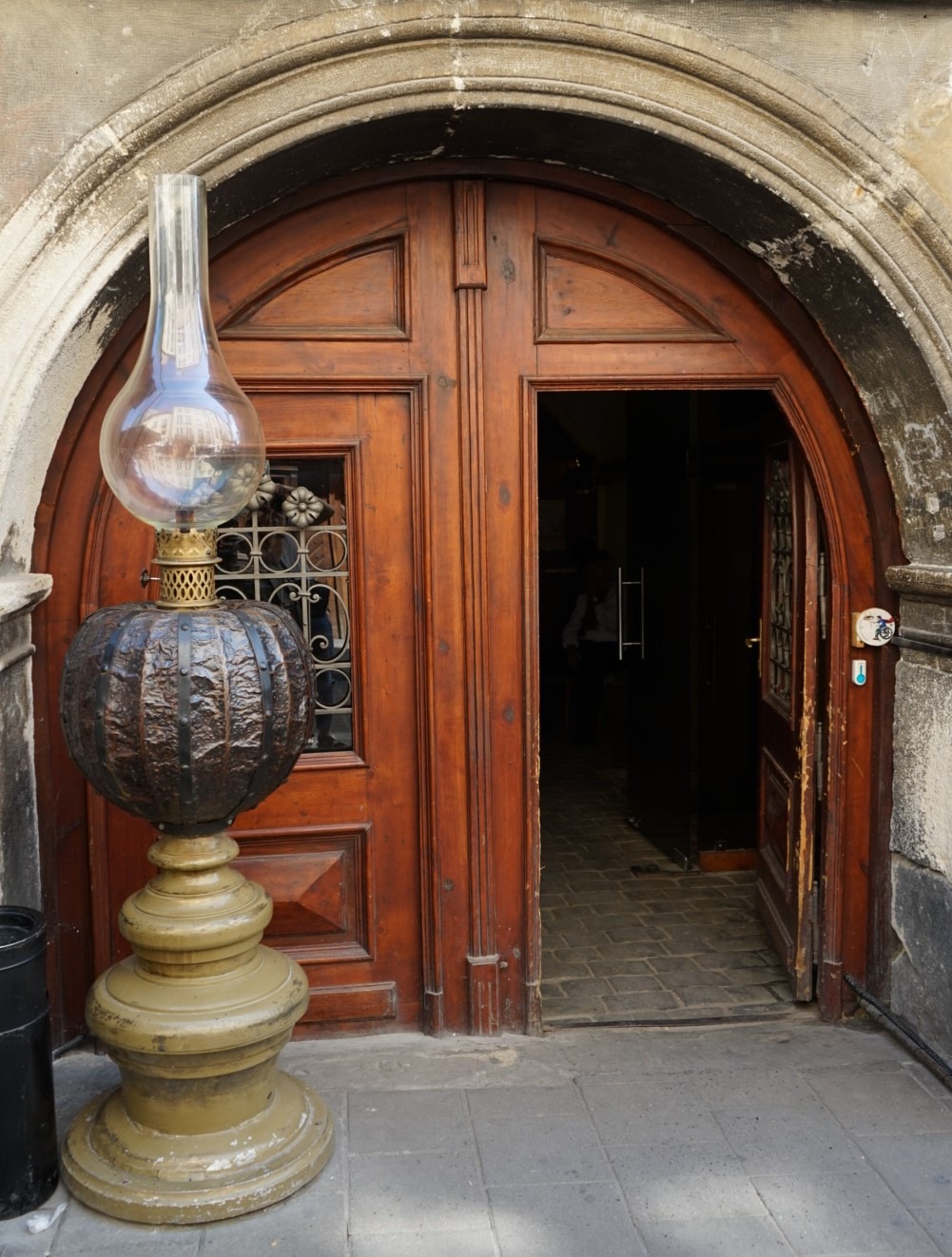 Did you know that Lviv was the place where the kerosene lamp was invented? There’s even a gas lamp restaurant-bar dedicated to this revolutionary invention!

In front of the building there sits a bronze sculpture of one of the two inventors of the kerosene lamp – Jan Zieg. Usually, tourists take lots of pictures, sitting opposite the sculpture on a special chair, and rubbing statue’s nose for a good luck.

In summer the restaurant opens an outdoor terrace filled with flowers and following the main theme of the restaurant-museum. Here you can see the miniature oil wells, gas cans and lots of different flasks. There is also a standing area, where you can enjoy different types of branded tinctures in test tubes. The standing area has its own special theme and you can read about it in my article Lviv Treats.

A man with a lit lamp helps you to get inside the restaurant. The stairs to the second floor are really narrow, so before stepping on them, you should pay attention to the traffic light and if the light is green, press the button on the traffic light to inform people upstairs that someone is coming up.

The restaurant’s cuisine is traditional Ukrainian. The prices on beer are between $1,5 and $2 The set of the branded tinctures for two is $10 and for a big company (6 and more) is $30 Over all, you can have a great dinner for just $10 – $15 per person including alcohol.  Everything is served in peculiar dishes and instead of cups and glasses drinks are served in chemical flasks and various laboratory beakers.

Check out my list of the best themed restaurants in Lviv!

The Gas Lamp restaurant has a beautiful glass terrace on the top floor with a remarkable view of the Armenian Cathedral and with an interesting perspective on the town.

The restaurant itself is filled with a special atmosphere of antiquity and unobtrusive light of kerosene lamps. Even when you pay the bill, the waiters will arrange pyrotechnic tricks for you to maintain this unique atmosphere.

History Of The Kerosene Lamp

To be frank the first invention of a simple lamp using crude mineral oil was made by Persian alchemist al-Razi in the 9th century in Baghdad. But a modern version of the kerosene lamp was invented by Polish inventor and pharmacist Ignacy Łukasiewicz in Lviv in 1853. And like most great inventions, it happened accidently. A funny story about that; in Lviv the owner of the largest pharmacy, the Golden Star (Pod Złotą Gwiazdą), Piotr Mikolasch purchased several barrels of oil. Somehow, he was convinced that he could get vodka from naphtha. For this task he hired two pharmacists – Jan Zieg and Ignatius Lukasiewicz. Of course they did not find vodka, but found a substance that turned out to be very flammable. It was kerosene. During their research they had a few explosions, but that didn’t stop the experiments.

Jan Zieg applied for the patent in Vienna and it was approved. Both pharmacists were very proud of their invention, and the first kerosene lamp was hung at the door of their pharmacy and replaced around 10 candles, but expected demand didn’t come. Just after, there was and issue at the hospital, where doctors needed to perform an urgent surgery at night and didn’t have a choice but to use the kerosene lamp and people realized that the lamp is a comfortable and also hygienic substitution for candles. The news about the Lviv invention reached Vienna very quickly and they soon began mass producing the kerosene lamps.

After methods and processes the purified oil was obtained, Ignatius Lukasiewicz continued his work on kerosene lamps and in 1854 he opened the first oil mine in the world. Later he introduced Europe to the first street lamp and opened an “oil distillery” — the world’s first industrial oil refinery.

Where To Eat In Bukovel, Ukraine